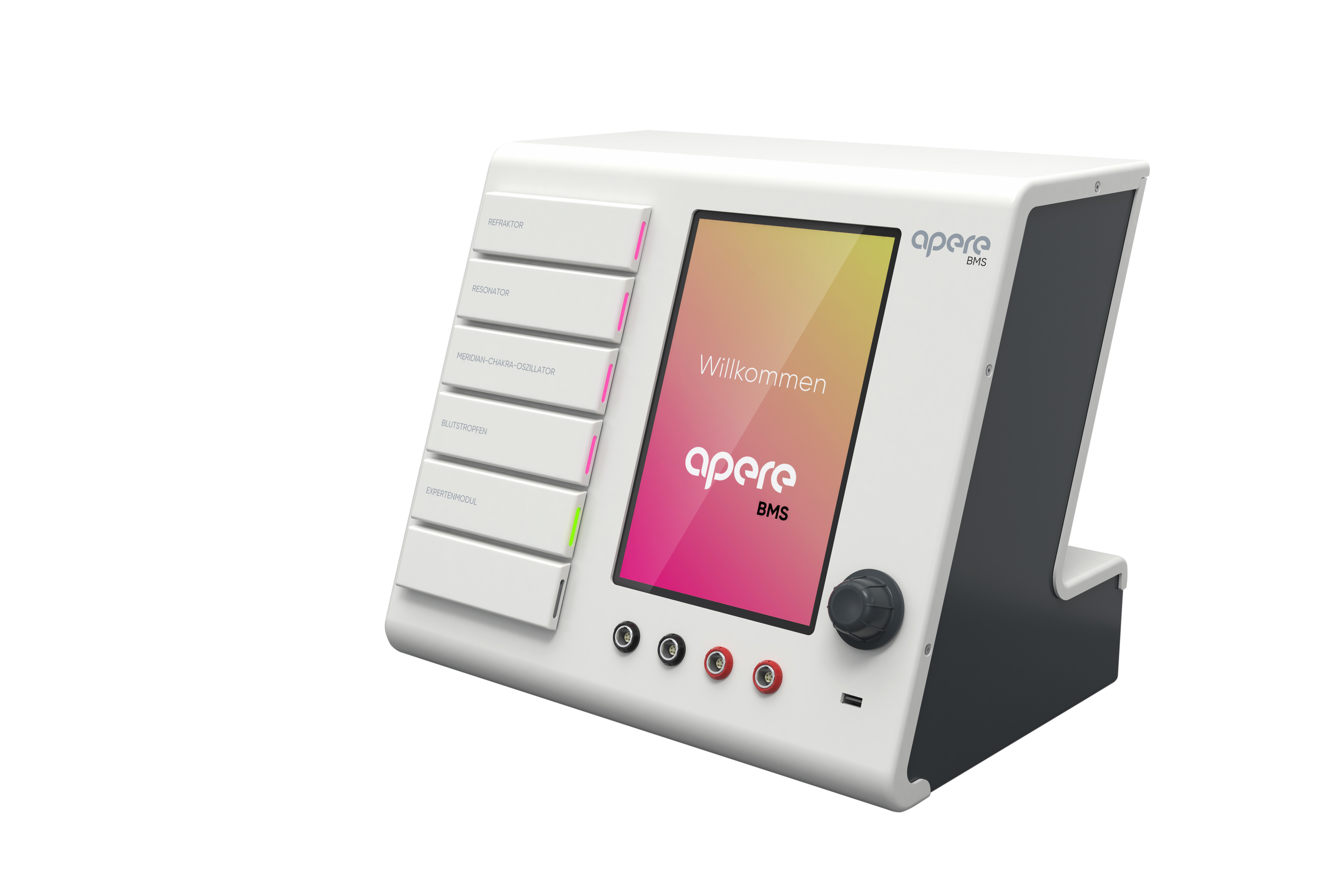 BMS stands for “Bioelectromagnetic Information Moderation System“. With this name, we have chosen a term which precisely describes the therapy method and is tenable in scientific circles.

The modular design of the apere BMS is particularly notable. This feature allows you to add additional modules to your device, and in this way, to constantly specify and individualise your therapy. Thanks to our extensive research, we are already working on new developments that can easily be combined with your BMS basic device in the future. The apere-BMS exclusively works with analogue signal processing. We believe that the analogue processes of a biologically vital system can not be mapped out and reproduced in digital form.

The integrated 10.1 inch touchpad and the turn-and-click wheel guide you intuitively through the therapy settings of the apere-BMS. With the intuitive menu navigation you will quickly learn to implement the desired settings and therapy options to suit your ideas and needs – beyond all therapy programs.

All functions at a glance

The meridian frequency sweep is the frequency filter of the apere-BMS. The working range of the frequency filter has a bandwidth of 0.245 Hz to 4.05 MHz. The special feature is the opening of specific frequency bands, which map the twelve main meridians and the eight Voll’s vessels. Thanks to this targeted filtering, the therapy impulses are specified more precisely.  Sweeping around selected centre frequencies is also possible.

With the apere-BMS you will be able to dynamise the therapy signal to meet homeopathic criteria. The important thing here is that it is not a purely technical amplification of the therapy signal, but an accentuation of the substances in the entrance by a corresponding homeopathic dynamisation. This means that the apere-BMS speaks the language of the biologically vital system.

The phase modulator allows you to treat your patients with therapy types A or Ai. It is also possible to run therapy type A and Ai alternately.

The function of the refractor is to interrupt the therapy signal selectively by signal-free times. In this way, the body or the body cell is given the necessary time to respond to the therapy impulse. These targeted interruptions of the therapy signal result in a more effective and shorter therapy time. The refractor has five different time patterns that can be used therapeutically and are calculated on the basis of the physiological and psychological time constants corresponding to the rhythm of nature.

Due to the newly developed cable system and a specially developed antenna (bioplasmic activator), the therapy signal is precisely transmitted to the entire biological system of the patient.

With the apere resonator in combination with the apere-BMS, a simultaneous low and high frequency therapy (0.245 Hz – 300 GHz) can be performed for the first time.

With the wide frequency spectrum of the resonator, even the highest range of meridian frequencies can be reached. In addition, high frequencies in a biologically vital system mean a high degree of information compression, which results in an increase in the quality of the therapy due to the high-frequency therapy that is possible with the resonator. 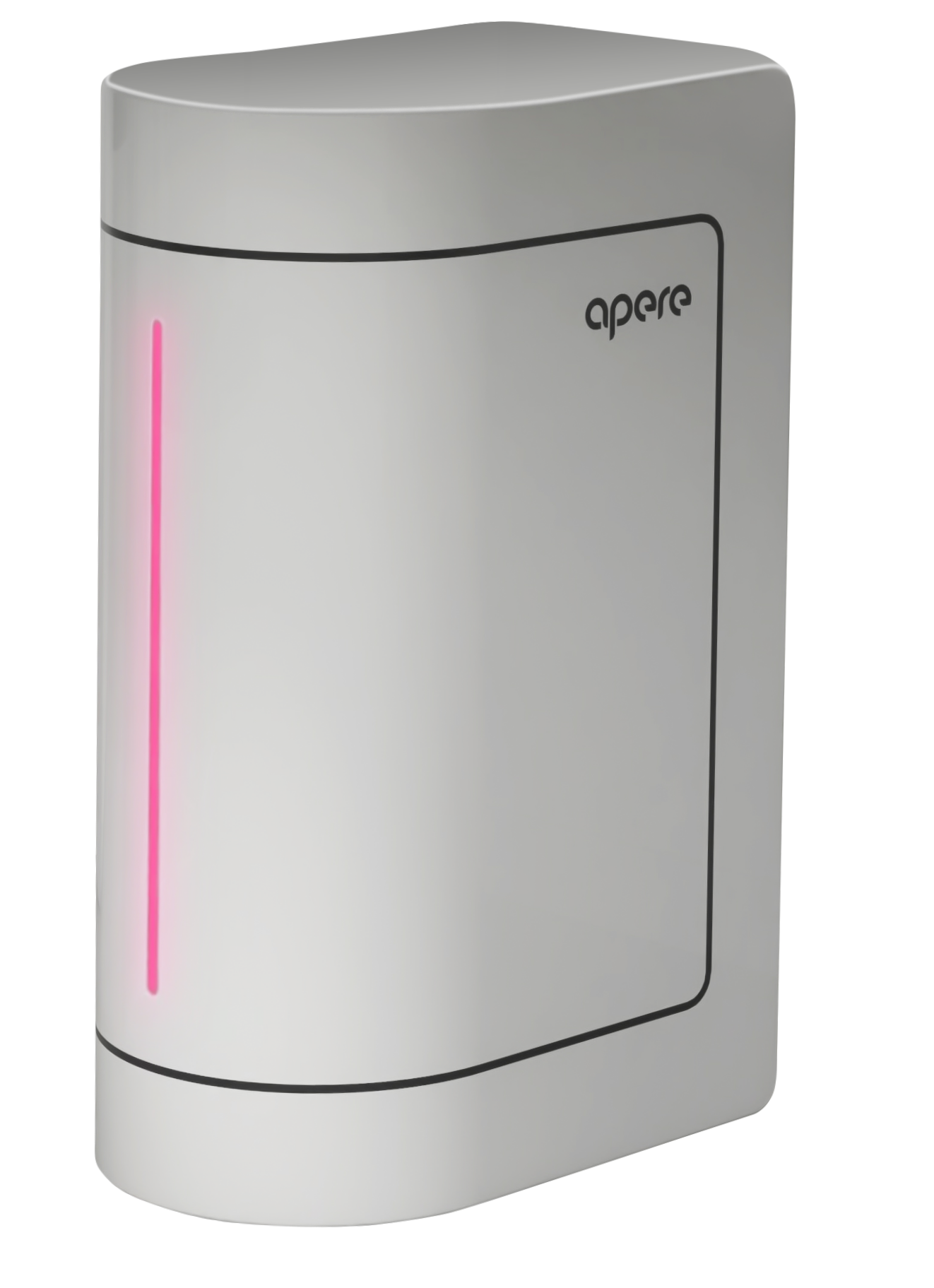 The analogue meridian and chakra frequencies generated in the meridian chakra oscillator are put into beat with the patient’s confused vibrations. This creates a new vibration, which then triggers the healing impulse.

This module revolutionises remote treatment via the blood drop. It is a quantum therapy that is based on the use of the entanglement principle. Due to the non-local effect, patients can be treated independently of the location.

With the tele-applicator, a shielded double-chambered honeycomb, one drop of blood can be placed both at the entrance AND the exit. This means that the change caused in the patient by the therapy can be directly fed back and included in the ongoing therapy.

The expert control offers further individualisation of all settings of the device, such as the selection of individual dynamisation levels in the homeopathic dynamisation, the selection of self-tested times at A and Ai alternately,  your own time settings in the frequency sweep as well as the short- and long-term storage of therapy steps. In this way, you can create your own therapy programs.

We will be happy to advise you on our special tailor-made offers.

As far as from apere GmbH & Co. KG provides information, apere GmbH & Co. KG does not assume any liability for the topicality, correctness, completeness or quality of the information provided. Liability claims against apere GmbH & Co. KG, which refer to material or non-material damage caused by the use or non-use of the information provided or by the use of incorrect or incomplete information, are fundamentally excluded. Apere GmbH & Co. KG shall be liable exclusively in the event of the conclusion of a contract in accordance with the provisions arising from the contract. Sign up here for the apere newsletter. The bioresonance therapy is a recognized therapy method in naturopathy, but not recognized by orthodox medicine. According to the opinion of orthodox medicine, this form of therapy has no healing effect. According to supreme court rulings (compare, for example, the decision of the Federal Court of Justice of February 6, 2013 - I ZR 62/11), a healing effect can only be assumed if this has been proven within the framework of a so-called randomized, placebo-controlled double-blind study with an adequate statistical evaluation. Whether patients subjectively experience relief or healing after application of the therapy is irrelevant for the assumption of a healing effect according to supreme court rulings. Since a randomized, placebo-controlled double-blind study with an adequate statistical evaluation has not yet been conducted for our products, our products may only be advertised if the lack of a healing effect is expressly referred to, as stated above. For further information and current case law please click here.